Here’s a breakdown of the best day and time to send out an email blast based on the best open rates.

The open rate measures how many people viewed or opened a specific message.

Keep in mind, when looking at how scheduling affects open rates, it’s important to remember that each list acts differently, so individual results will vary. 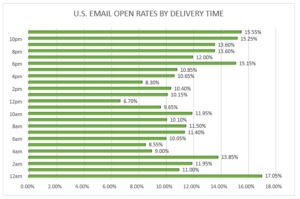 This data is from MailerMailer’s  13th Annual Email Marketing Metrics Report, which analyzed over 1.4 billion email messages sent between January 1, 2012 and December 31, 2012,

* Results have been adjusted to reflect the local time of the sender.